“The powerful Kobayakawa samurai clan wants to thwart your conquest of Japan. Do you have the strength and guile to stop them? In seven rounds, with only 15 cards, bluff and bet your route to victory.”

With this introduction, iello gives the tone of Kobayakawa, a quick betting game. You will have 7 rounds to gain the most kamons, winning your opponents bets after taking strategical decisions.

Will this 15 minutes bluffing game seduce you?

Kobayakawa’s box is small – it is no surprise to find few components in it.

Setting up the game

A game of Kobayakawa is played over 7 rounds of 3 phases:

At the end of the seventh phase, the player with the most kamons will be victorious.

Shuffle the deck of 15 cards and give one to every player. Only the player knows the card he received.

Place the remaining cards, face done in the middle of the table and reveal the first one. The top card of the revealed deck will later come as a bonus to a lucky player. We’ll see how a bit later

In this round, I decided to draw, hoping to replace my 13 with a better card.

During this phase, you will have to take a decision: either draw the top card of the deck to replace the middle one, or draw it and decide to keep one of the two cards in your hand. The second one will be discarded, visible in a discard pile.

How will you decide? Well: just know that during the fights, every player will be allowed to fight. Every fighter will reveal their card.

So… Will you try to replace the middle card, hoping to impact the strategy of your opponents, or will you rather try to get a better card for you?

I eventually decided to discard the 4, keeping the 13 in my hand.

Every player will be given one draw phase, clockwise.

Once the turn comes back to the first player, the draw phase ends, and we can now start the fights.

For this round, two players decided to fight

Starting with the first player, every player will be given the opportunity to fight. To fight, a player will need to place one of his kamons in front of him.

Place a kamon from the central reserve in the middle of the fight area.

Note: on the seventh round, you need to bet 2 kamons to fight. You will also place the last 2 kamons from the central area. If you have less than 2 kamons left, you may not fight.

After every player chose whether to fight or not, players will reveal their card.

When every player has revealed his card, you will need to find who has the lowest card value.

That player will add the middle card to his score. Every other player will score the value of their card.

The player with the highest score will win the round: he will take all the kamons bet in that round, including the one(s) from the central reserve.

As the round ends, the starting player token moves to the next player and you can get ready for the next round.

Remember that the seventh round is the final one, and that you will bet 2 kamons on this one: the balance of forces may change in that last round!

A betting game is always fun: this one can be explained in matter of minutes to your friends, and it takes only a few minutes to play. We always encounter a lot of frustration when the one card we were relying on changes.. Sometimes for better, often for worse.

I would also recommend you to sleeve the cards: they will wear out, sooner or later, and scratching and other markings will happen. If a card is obviously too marked, part of the fun of the game will be ruined. 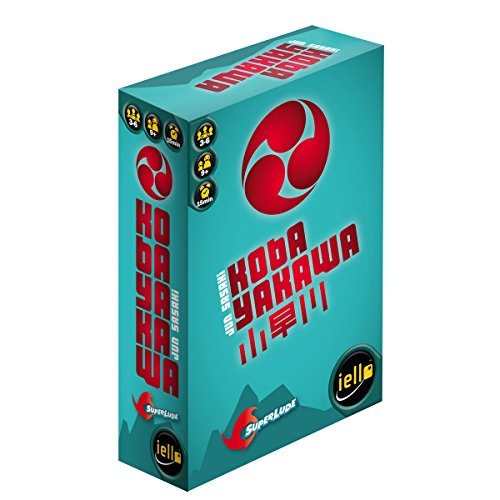 The powerful Kobayakawa samurai clan wants to thwart your conquest of Japan. Do you have the strength and guile to stop them? In seven rounds, with only 15 cards, bluff and bet your route to victory.

Kobayakawa - by Oink Games Designed by the awesome Jun Sasaki This was the new game at the Tokyo Game Market (Apr 28th, 2013). I already had some of ...