Home » Reviews » Mauw – what would you do if you had 9 lives?
Reviews

Mauw – what would you do if you had 9 lives?

Number of Player: 2 to 6 Players

When the cats reached New-Zealand in 1640, the Maori Spirits found this animal to be an exceptional being.

The secret of their 9 lives attracted envy and the cats had no choice but to become fierce warriors to preserve it.

Attacking, defending and strengthening your ranks is the only way to win this game.

The game is sold in a metal box and contains 72 cards:

Shuffle the deck, and distribute 4 cards, face hidden, to every player.

The hairiest player can now start the game.

The back of the cards show the value 9 and a multiplier value of 2. These are the Mauws.

One after another, players will take a turn. During your turn, you will play a card then draw cards until having 4 cards in hand. If, for any reason, you cannot play a card, you will discard your hand and draw another 4 cards, passing your turn.

When playing a card, you may reinforce one of your columns, or attack an opponent.

Every player has his game zone in front of him. There, he may create up to 4 columns. To start a column, simply place a card, face visible. Each column may contain up to 3 Mauws, and possibly a 4th card with a value.

When playing a colored card, you will place it either:

On your turn, instead of reinforcing your columns, you may chose to attack an opponent. Simply play a warrior of a color visible on an opponent’s column.

Your opponent may defend, by playing a card of the same value and same color. If the warrior is defended, both cards are discarded. If not, the attacker will trigger an association effect, discarding both cards and drawing a Mauw if the two cards have a value 9, or turning the bottom warrior to its Mauw side and placing both cards in his play area.

As with reinforcing a column, if both cards cannot be placed, they are discarded.

You may also attack an opponent with a Spirit, a card of value 0. This may only be placed on top of a Mauw.

The defender will only be able to remove this Spirit by playing a Spirit of his own on one of his turn.

Joker may replace any card of your choice – Warrior or Spirit. Declare the value of your Joker when attacking, as your opponent may defend.

You cannot attack when playing the Joker as a Spirit.

The game ends as soon as a player owns in his play area 3 columns with 3 Mauws. You will then count the points, the player with the highest number will win the game.

As I was walking past a booth in Essen and was offered to try this game, I was thinking “why not”, but not so sold to the idea: a quick game with cats seems very simplistic. Yet, the art was intriguing and the rules were quick to explain.

It took a table of three a couple of rounds to get the feeling of the game and the 20 minutes spent playing went very fast. We ended the game with a sense of “we want more” and brought two copies home.

And this may be a strength of this game: it is quick, the mechanics are simple but still, to outsmart your opponents, you will have to take the correct decisions: these card that you paired in your hand may be stolen by your opponent. Should you wait to be able to defend? Will you put a 0 on his pile now, or will you wait another turn?

This game is also a lot of fun: the theme is light and you will curse at your opponents for stealing your card or placing a spirit on your column of 3 Mauws, but you will do that with a smile. And once the game is over, you will suprize yourself, shuffling the deck and naturally drawing four cards to every player, ready to fight another day. 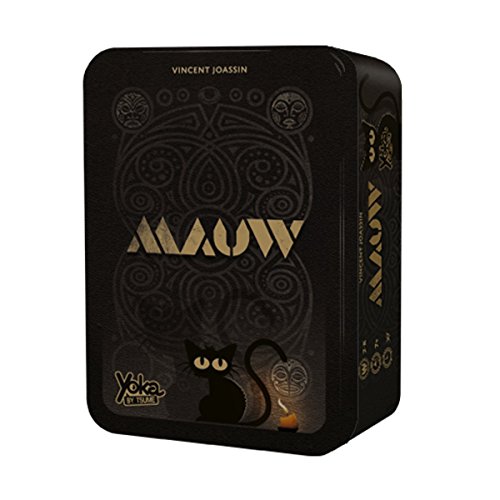 A very quick and simple game, for 2 to 6 players, where playing the right card in the right place will make the difference.

PROS
CONS
User Rating: Be the first one!

Too Many Bones - a dice builder RPG