Taluva Review: A Fun and Thrilling game with a Good play again value

Lost in a tropical sea, the volcanic island of Taluva is slowly rising above the water. Every turn, volcanic eruptions will shape the landscape while colonies settle across the land.

Expand your colonies and destroy your opponents. Beware though as your destructive move may be helping others more than you’d want.

This game from Marcel-André Casasola Merkle cleverly combines tile-placement and city building. This abstract game consists of 12 rounds per players and you should count a duration of about 10 minutes per player.

Shuffle the tiles, face down, and make piles to have 12 tiles for every player. Every player then receives a set of 20 huts, 2 towers and 3 temples.

In this game, two players are ready to compete. I have prepared 24 tiles. Both players received their matching sets of buildings. 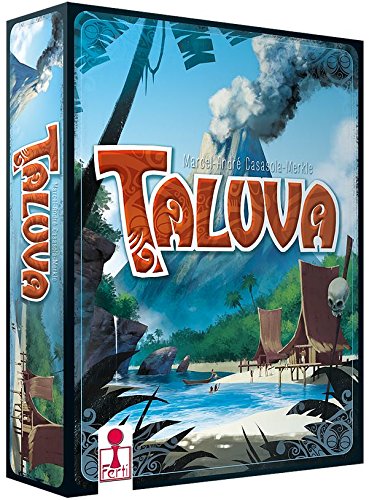 On his turn, a player will draw a tile, place it on the board, then will play at least one building. To win, you will need to have played all your pieces of two types – either every temples and towers, or every towers and huts, or every temples and huts. When the last tile is drawn, the player finishes his turn normally. If no one has won, then the player having played the most temples win, if ex-aequo, then the player having played the majority of towers wins. And if there is still no winner, the one who played the majority of huts will be claiming victory.

If during your turn you cannot play one or all the required buildings, then you will be eliminated.

Every tile consists of three hexagons, one of which being a volcano. On the two others, different types of lands will be displayed. 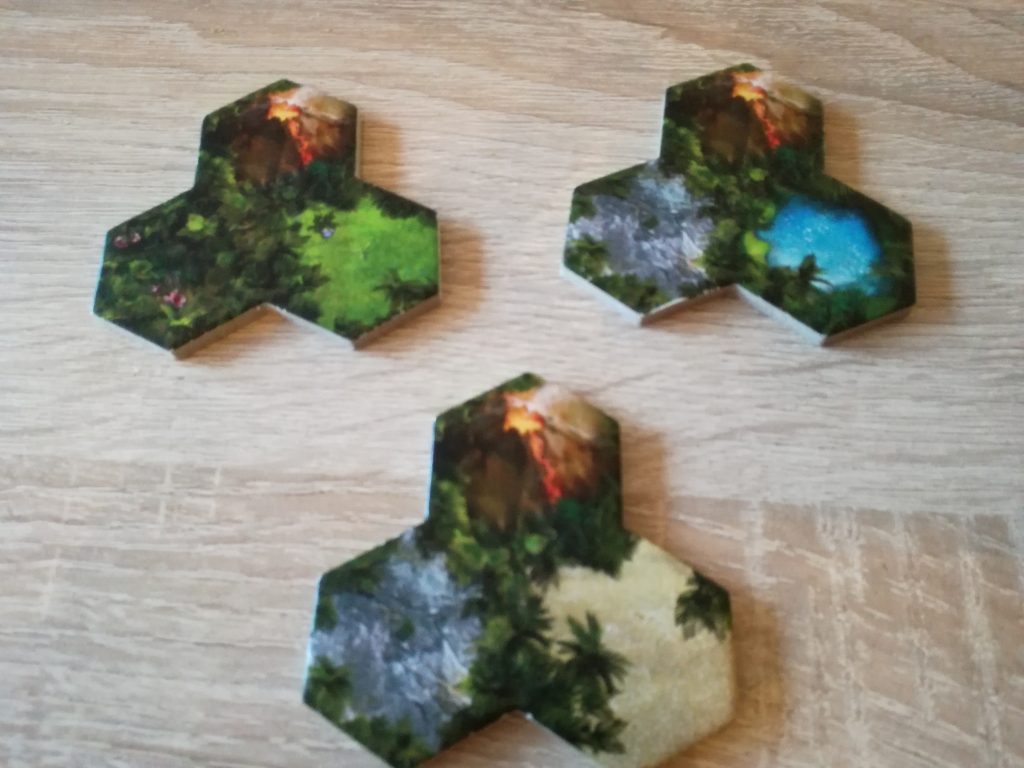 On those three tiles, you can see the five types of lands available: jungle, prairie, stone, lakes, desert

When playing a tile, you need to ensure at least one side of one hexagon is attached to another tile. There is no specificity about the types of lands though you will soon see that these will impact your gameplay.

Once you have played your tile, you need to place at least one building, on any tile already in play. A few rules are to be followed:

Any group of one or more of your buildings will be referred to as settlements. 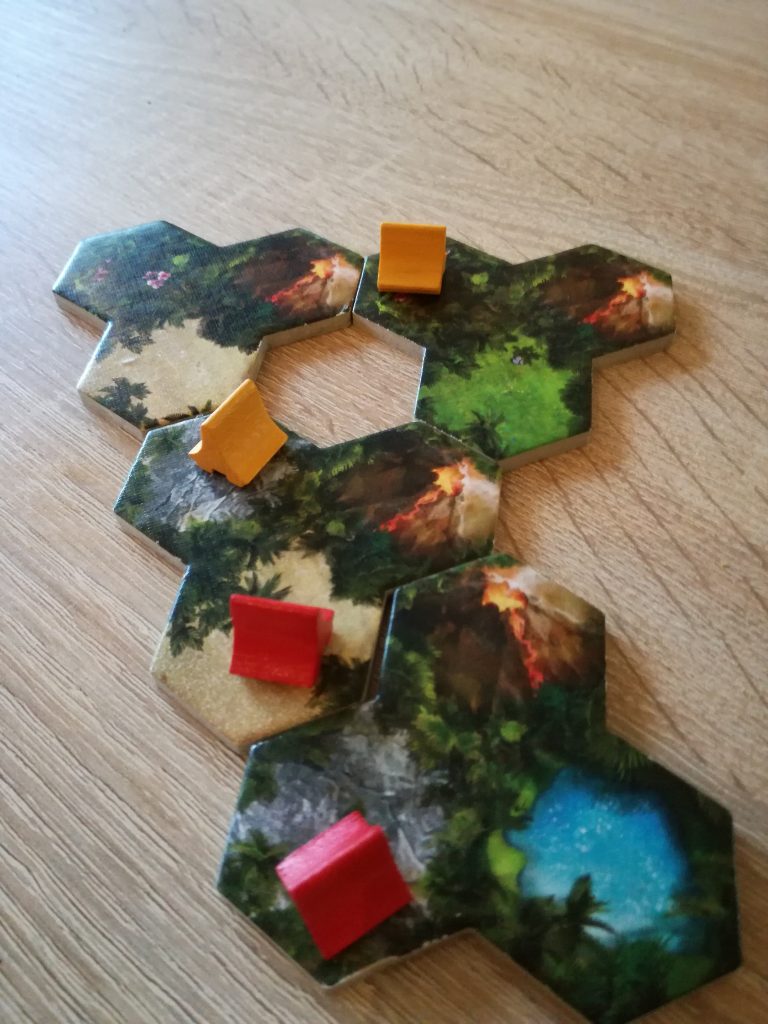 You can see here the island of Taluva slowly rising from the sea, after both players played two rounds.
You can spot three settlement: the red one as one settlement, of two spaces, while the yellow player has two settlements of one space.

The island is rising, right? Yes. And another important piece of strategy will be levelling the island. When you play your tile, you may put it on the top of other tiles. There again, a set of simple rules need to be followed:

When levelling the island, we will refer to the first level as Level 1, the second as Level 2, so forth

Why would you level the island? Well, as a start because Towers can only be placed on a tile of Level 3 or more, adjacent to one of your colonies. But another interesting reason is the rule of expansion:

When playing a hut to expand an existing colony, check the type of terrain you are going to play on. Place a number of huts equal to the level of the tile on any tile adjacent to the colony you expand with the same terrain type. 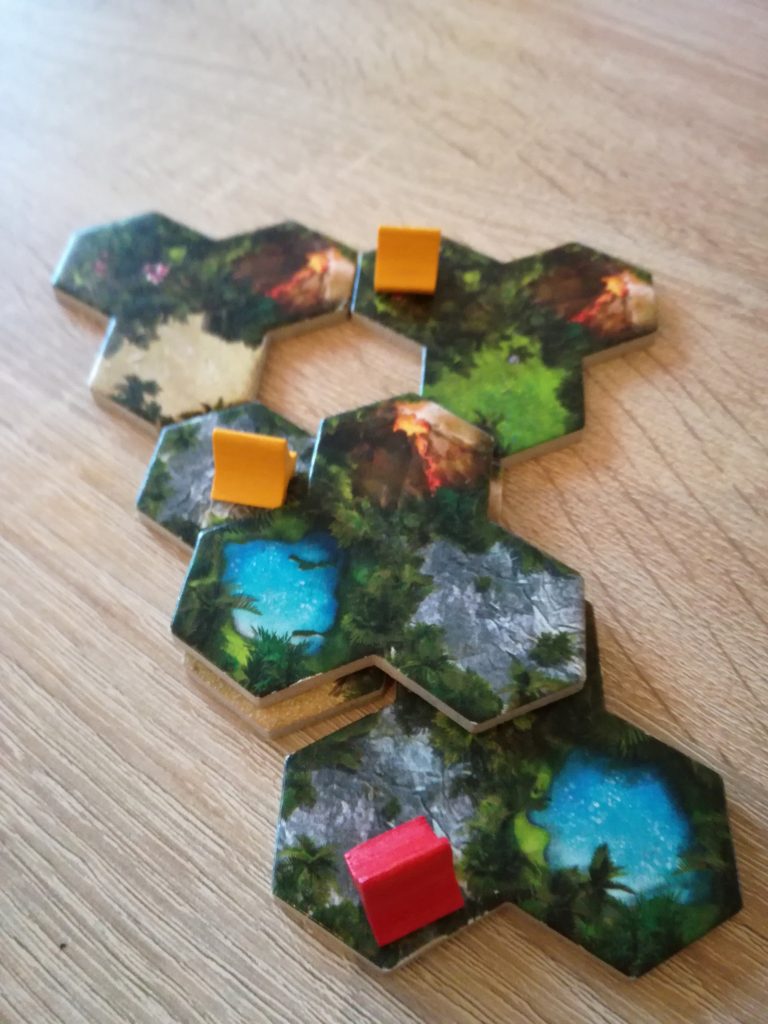 In this situation, the red player chose to destroy one of his building to place a Level 2.
He will then place 1 hut on the right of his colony, expanding on the lakes.
As on the left of his colony, a lake Level 2 is adjacent, he will place there 2 huts, and will have a colony of three hexagons.

Keep in mind than any hut you played, even if destroyed, will count towards your victory. Be careful though: misplaninng an expansion may get you eliminated. Forcing your opponent to lose is always a fun way to win!

Temples can be played in any settlement of your color with three or more hexagons. You can have only one temple in one given settlement.

The rules of expansion don’t apply to the temples nor the towers.

With those simple rules in mind, it will take you a few games to understand all the mechanics. This is when the fun starts: you will then start planning you strategies.

During their first games, players typically rely a lot on luck, hoping to get the correct tile to play their moves. Soon, with practice, you will learn to create your own luck, anticipating moves with pretty much any types of terrain.

After a few more games, you will learn to play many huts very quickly, and mastering the proper way to “cut” your settlements will surely give you an edge on your opponents. 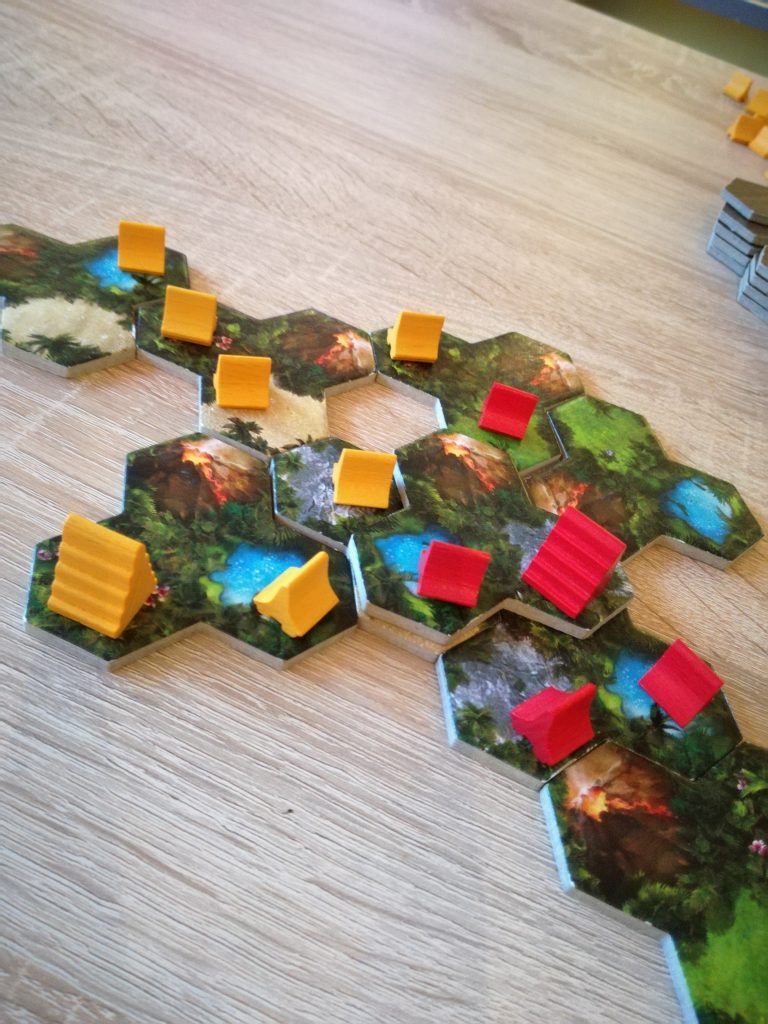 In this situation, the yellow player can quickly create a new colony where he is allowed to play a temple.
This comes at a cost though: this move offers his opponent an opportunity to play a tower. 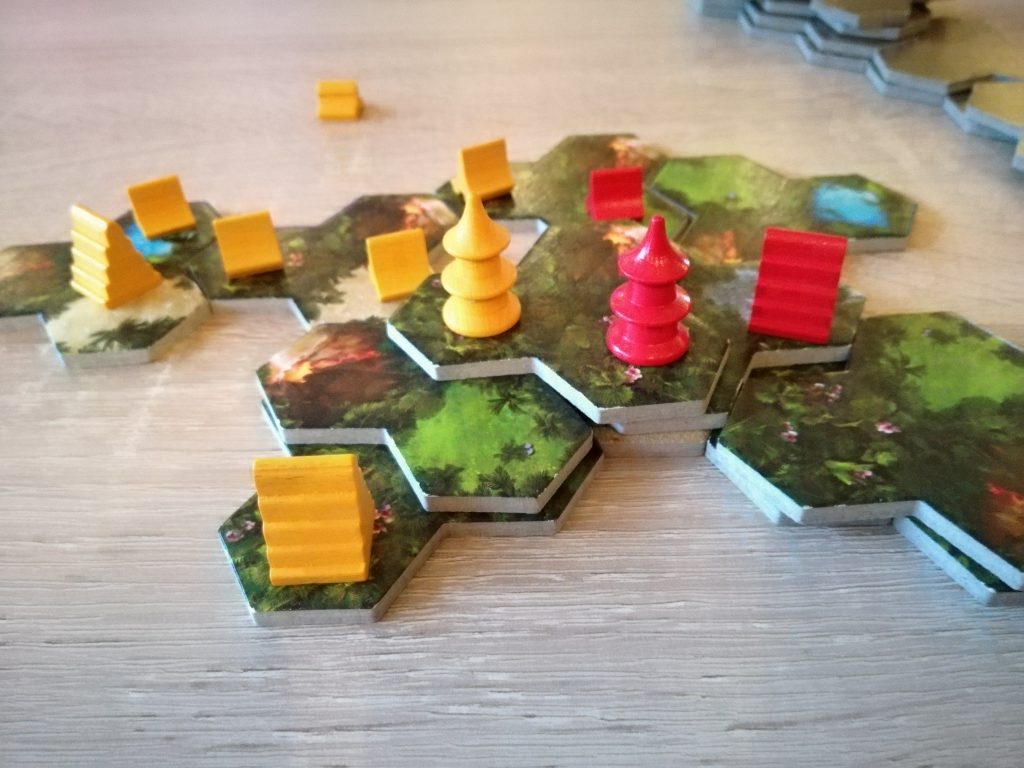 The opponent seized the chance, but the yellow player still has one space to play his own tower.
Is doing so the right move? Time will tell

On some other occasions, a player will take pleasure in placing a single hut in the middle of a colony of his opponent. This will sometimes block the future moves of the other player.

Be careful: you may have your views on how to win, but the rounds go fast, and soon, you’ll realize that you are one tower short from the victory.

This game is a very fast one, and the strategy required to win is fairly high. It will take a few games to new players to get the angst of it, and seasoned players should take time to explain and guide the newcomers. As with many strategy games, playing an opponent too weak or too strong takes away the fun. But teach it well, and see the student beat the master is what makes the few first games worth.

And once you get into the strategy, it is a real pleasure. What will be your next tile? Will the opponent notice this move you did and the impact in the next turn? The thrill is real, and more than once, I felt myself thinking “I hope he doesn’t see it…”, biting my lips out of impatience of playing my next turn.

With more than two players, the strategy changes dramatically, as does the landscape: you’ll often have to choose whether to play for yourself or to block you opponent. But if you don’t do it, will the next player do something?

Lost in a tropical sea, the volcanic island of Taluva is slowly rising above the water. Every turn, volcanic eruptions will shape the landscape while colonies settle across the land. Expand your colonies and destroy your opponents. Beware though as your destructive move may be helping others more than you’d want

Ryan Metzler reviews Taluva To buy the game, go to http://tinyurl.com/taluvagame For more info and reviews, check out www.dicetower.com.