To Court The King Review

To Court The King Review

To Court the King 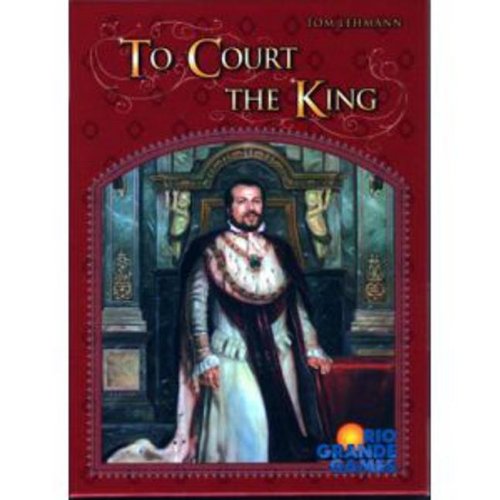 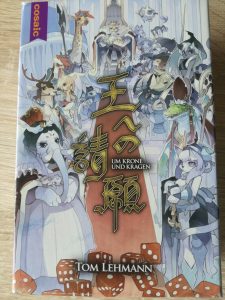 Japanese Edition of Court the King

Four friends are home, and we want to play a game. They don’t know much about games, so I want to offer them something easy to grasp, quick to explain and yet challenging to play. Rummaging through my boxes, I remember To Court The King.

Published in 2006, this game by Tom Lehmann is mixing dice and card drafting and sets the players as petitioners trying to gain the King’s favors. To do so, all of us will first want to befriend the servants, before touching the heart of the nobility.

The game set up takes pretty much as long as explaining the rules: you place on the table 5 rows of cards, each marked with a level.

On each row, you can find 2 to 5 families of cards, describing the cast of the realm.

From Laborers to Alchemists, you will find many friends to increase your chances over each round. Depending on the number of players, you will not have the same number of cards, thus forcing you to take critical decisions over the game.

Each player will then receive an initial card, double-faced, showing the Charlatan and the Fool, and a summary card. One player will receive the first player marker and the game may start.

Buy this item @Amazon.com
back to menu ↑

Fairly simple: take three dice, throw them… Look at the result. Look at the cards. Which one do you want?

Every card has a cost to be acquired. When throwing 3 dice, you’ll only be interested in the level one cards. Over the time, with more dice, you’ll be able to discuss your needs with higher ranking members of the society, meaning higher level cards.

And good news: as a start, the Charlatan already allows you to throw a fourth die before turning into a Fool.

The cost of cards will vary, some being number of equal dice, some will need specific values or sequence of numbers. 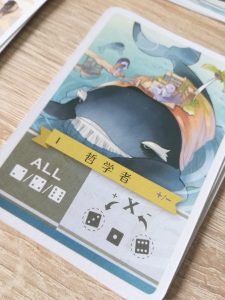 Philosopher allow me to move pips between dice 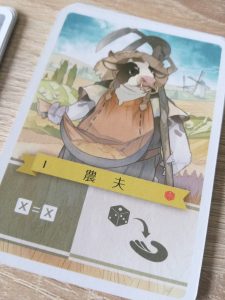 This card will give me an extra die 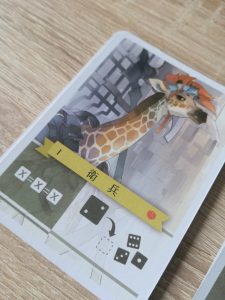 This card will allow me to throw a die again

Any card capacity can only be used once per round, but will be used at every round. 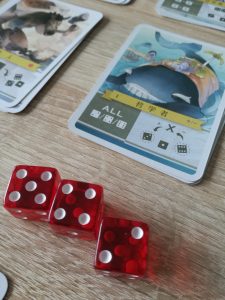 In this example, I am considering trying to roll  the “even number” dice again to gain the Philosopher. This card will allow me to move any number of pips from one die to another.

After each throw you’ll need to always set at least one die aside, but you may also save more than one. Throw all the remaining dice.

When you have set all your dice asides, you’ll have to pick a card – if your dice combination allow it.

Note that any card capacity may only affect the active dice, not the ones set aside.

Every player will go, in turn, and when the last player has played, he becomes the first player. 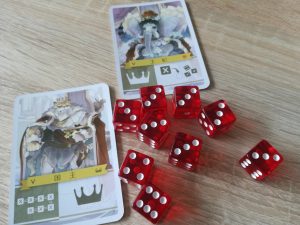 Throw 7 dice of equal value to gain the King

Soon enough, one or more players will be in a position to aim for the King. You’ll need to throw 7 dice of equal value to gain him.

The first player to court the King will also gain the favors of the Queen, who will grant you one additional die of any value.

Beware: gaining the King’s favors doesn’t mean that you will win the game. After the end of the current round, you will play a last round, where the player owning the King will play last.

After reading this, you have a pretty good understanding of the rules. You just need to understand the set of icons on the cards to quickly know what they do.

Three actions are available, and they are represented by three icons:

And obviously, the summary card every player receives will be there to remind you what any character does.

All you need now is to set your strategy.

And, yes, strategy is a key component of this game: the rules are simple, but playing is quite challenging. You may say “yet another Yahtzee” when playing this the first time. But a closer look will show you how well balanced the combinations are, and how bad choice will impede your play.

A typical error is to target only cards that will give you more dice. Yes, this is always helpful, but you’ll soon realize that using cards giving you the ability to change your thrown values will give you a decisive advantage. And the opposite, playing only with cards modifying your values, will only allow you to play in the lower levels and will ban you from the nobility’s quarters.

Another decision is whether to go for the King or not. Gaining him offers you the Queen, hence one additional die. But sometimes, it’ll be wiser, for example, to add the General to your capacities: throwing two more dice may give you an edge if another player grabs the King.

This game gains to be played and replayed. The first few times, you’ll play your own way.You will decide what are the moves that make you win or lose.

Look at your opponents:

Soon enough, you’ll start playing your favorite cards, and will understand another core component: look at your opponents.

This will lead you to interesting choices: would you rather go for that card that you want now, or wouldn’t it be better to take the last remaining Magician that the next player will target, no doubt there? Setting your opponents back one turn is sometimes a great way for you to win the game.

And for the five of us, this was it: less than an hour later, the game was ended, with a tie – the King actually won that one – but all of us were fairly close to victory: there was a bit of frustration, a bit of “I should have done “this” when […]” but we all had good fun.

To Court the King
Buy this item

Amazon.com
back to menu ↑

Typically played under 45 minutes, this is also a good family filler: the rules are easy, there is competition, and even kids from 10 years old will enjoy it. On a rainy Sunday afternoon, you’ll appreciate opening the box for a few rounds.

The format of this game – 60 cards, 12 dice – makes it a nice travel game, but be aware you’ll need some space on the table. Not only do you need some for the initial set up, but over the time, as every player gains some cards, you’ll want to be able to see all the cards in front of them. And still be able to throw your dice.

This is definitely not your “let’s go camping game” but will be a great one for a nice friendly evening.

You may find different editions of this game on the market. My favorite one has very nice illustrations – manga style, light colors – found in Japan. The gameplay is exactly the same, it just talks better to my eyes. And yes: nice cards always make you want to play the game more often, and show it to more friends.

To Court The King Final Rating:

This is definitely not your “let’s go camping game” but will be a great one for a nice friendly evening.

To Court the King